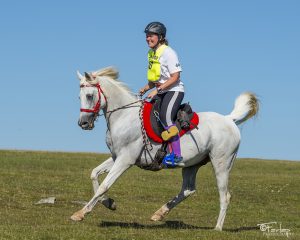 I’m 36 and have been riding for as long as I can remember. I rode at my first endurance ride in 2002 and was hooked! I now have 4 Arabs which I’ll tell you about one at a time over the next few months.

I’ll start with Darwin, as this last month with him has been amazing. He’s 20 years young and I’ve owned him for 15 years, he’s my world!

He’s an advanced endurance horse and this time last year I almost had to retire him. He damaged his deep digital flexor tendon badly, we opted for Lipogems treatment and it worked!

He’s now sound and back competing. He done a 32km ride early July on Bodmin Moor where he gained a grade one, then a week later he raced at Cirencester Park, where he came 3rd. I’m sure his EquiGlo crew stops helped!

I’ll go on to explain more about endurance in my blogs over the next 12 months while I’m an EquiGlo ambassador and hopefully get a few more of you hooked on this exciting discipline.