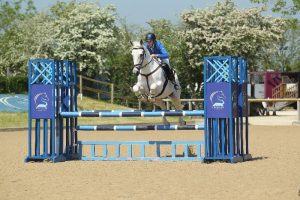 I am an amateur rider who works extremely hard to fund my passion for horses by combining working full time in marketing, running my own livery yard Cherry Lane Equestrian whilst competing my 19-year-old horse Skye in British Showjumping competitions and my mother’s 14.2 20-year-old Jazz in dressage.

I was always the crazy horse mad girl at school & would talk for hours about my ponies at any given opportunity and nothing has changed apart from being more passionate than I have ever been.

My current horse Skye I have owned for 11 years and she really is my horse of a lifetime who has the biggest heart & does everything she can to get over a fence, even if I do give her the odd dodgy stride! We have been on the pony club/riding club & university teams in both showjumping and eventing but now we focus purely on showjumping which has always been my first love.

Jazz belongs to my mother although I do tend to steal her quite a lot. We purchased her from auction when she was 18 months with the idea of producing her to sell. Well, that never happened and 18 years later she is still happily grazing in the field. She has done everything from hunting, pony club, eventing, showing & in recent years really loves the dressage and never fails to come back with a rosette.

The season has already been a successful one so far with Skye qualifying for the British Novice 2nd rounds, D&H amateur regional championships as well as being selected to be on the Area Oxfordshire British Showjumping team in the national team qualifier & picking up several placings and prize money along the way.

The plan for the rest of the season is to move up to Newcomer level by the end of the season which has been a goal of mine for a while now before hopefully taking part in some winter qualifiers.

Jazz has had a quieter season this year especially as she really suffers in the heat, however that didn’t stop her putting her dancing shoes on and winning her prelim dressage class a couple of weeks ago which I was delighted with.

We are extremely excited and grateful to join EquiGlo and look forward to representing them.